To follow-up the September 18 Monster’s panel, San José State University and The Hammer Theatre hosted yet another stellar gathering of scholars, interested Frank-o-philes, and community members to talk about almost 100 years of Frankenstein films.

The Fall 2018 celebration of Mary Shelley’s bicentennial publication of Frankenstein, her most famous work, continued with “Frankenstein Goes to the Movies” on October 18.  An informal evening of film clips, discussion and audience talk-back, and a panel of experts from San José State University and the greater San Francisco Bay Area, it was produced and moderated by Dr. Alison L. McKee (Film, SJSU), who donned a cosplay BRIDE OF FRANKENSTEIN wig to set the tone of the evening.

Audience members asked poignant questions such as a search for an film adaptation that cast Dr. Frankenstein as a female character. Kirsten Brandt’s play, The Frankenstein Project (v2.0), achieves just such a gender-bending representation:

a modern re-telling of Mary Shelley’s classic tale set against the backdrop of late-breaking developments in science and medicine. Haunted by the death of her mother from a cocktail of weight-loss pharmaceuticals, PhD candidate Mary Frankenstein (Mary #1) strives to create life and, by doing so, conquer death. The “monstrous” creation that is the result of her work is Mary #2, a woman who is plagued by the memories of the seven prostitutes that make up her body. Mary #3, Mary Shelly, floats in and out of her own story as her creations grow beyond her control.” (from Kirsten Brandt’s website)

…and “Young Frankenstein” a close second as the guilty pleasure.

Moderator, Alison McKee, notes the homage that Mel Brooks pays to James Whale’s “Bride of Frankenstein” (1935) in the hermit’s scene where the creature discovers friendship for the first time.

These and other clips of movies, lectures, plays, and a variety of adaptations can be found on the Frankenstein Bicentennial YouTube Channel.

The fun continues through November 2018 with even more Frankenstein Bicentennial events, including the international Frankenreads,a project of the Keats-Shelley Association of America, funded by a Chairman’s grant from the National Endowment for the Humanities, to celebrate the 200th anniversary of Mary Shelley’s novel Frankenstein, or The Modern Prometheus (1818) by encouraging people around the world to organize or participate in events celebrating the novel — especially by conducting public readathons of the entire novel on Halloween Day 2018 and in “Frankenweek,” October 24-31, 2018.

Our regional Bay Area partners, Santa Clara University and University of San Francisco, will host public readathons all day on Halloween — join them if you’re in the area! 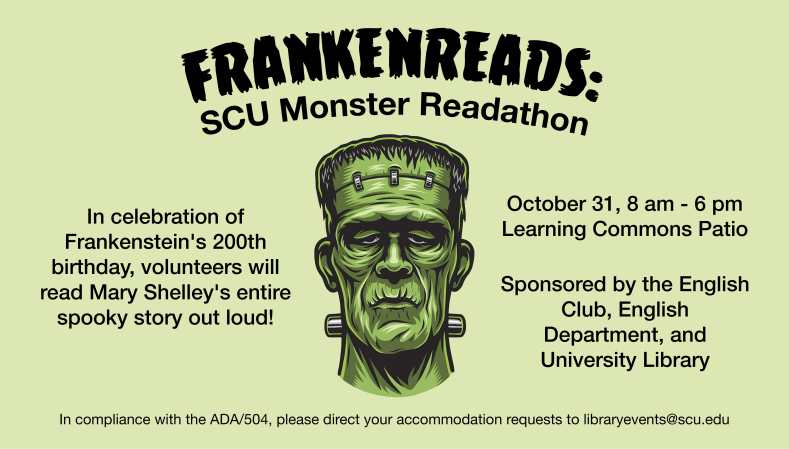 If you can’t make it to an in-person event, be sure to watch the livestream of the central Frankenreads reading of Frankenstein at the Library of Congress beginning 9am EST Wednesday, October 31st, 2018 at http://www.youtube.com/LibraryOfCongress! And share your own comments, pictures, and videos on Facebook, Twitter, Instagram, and YouTube with the hashtag #frankenreads!

If you’re too busy on Halloween getting costumed-up, join us on November 2, 7-9pm at SJSU for the Annual Poe Fest, a celebration of Edgar Allan Poe’s incredible array of haunting poetry and prose. Attendees are invited to read, recite, and perform Poe’s stories and poems — will you be among those reciting “The Raven” this year?